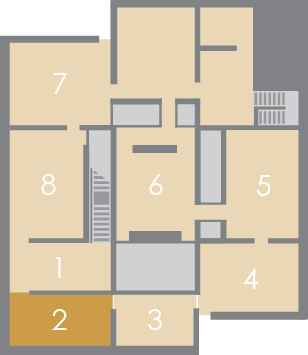 Works made between 1923 and 1936 exemplify Still’s early interest in recording the world around him, especially the landscape, as well as the other most enduring theme in his oeuvre: the figure. Sketches that capture motion—riding, plowing, digging—coexist with studies of grain elevators and other buildings that stress robust structure. Since drawing necessarily involves simplification—three-dimensional volumes become two-dimensional planes and lines—it always entails a certain degree of abstraction. Early on, Still drew inspiration from this aspect of the medium. His pastels and watercolors of the Alberta landscape were strikingly abstract for their time, almost as though the stroke of the brush or the crayon condensed the scenery into an idea rather than an illustration. The pastel stick itself provided a readymade mix of color and linemaking.

From the Renaissance onward, the Old Masters extracted diverse possibilities from draftsmanship. On the one hand, drawings could be quick, realistic studies—made on the spot—which became the basis for more elaborate, highly considered paintings. On the other hand, works on paper were sometimes conceived as fully finished, complex pieces in and of themselves. Still followed this bifurcated lineage. For example, in his graphite sketches of farm labor on the Alberta prairies during the 1920s and ’30s, Still explored both directions: the spontaneous and sensual, and the deliberate and austere. Furthermore, by playing with the two contrasting drawing modes, he overcame the restrictive Renaissance distinction between drawing (disegno) and coloring (colore), instead creating an art in which one dynamic fueled the other.

These architectural structures reflect the angular, faceted style of treating masses that is found in the mature art of Paul Cézanne (about whom Still wrote a master’s thesis in 1935). Their verticality also turns them into stalwart surrogates for the upright human presence. 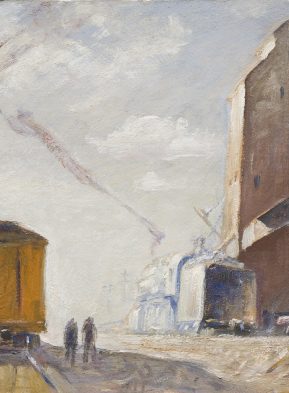 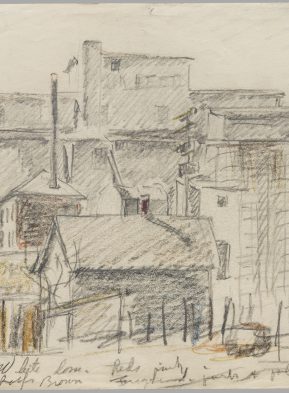 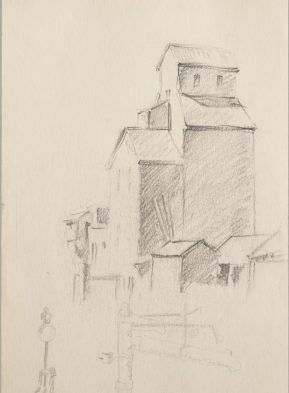 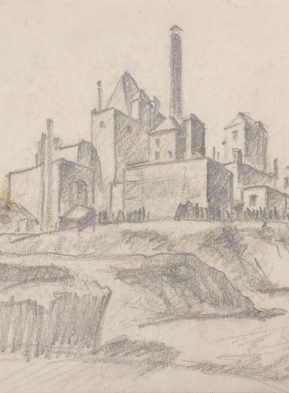 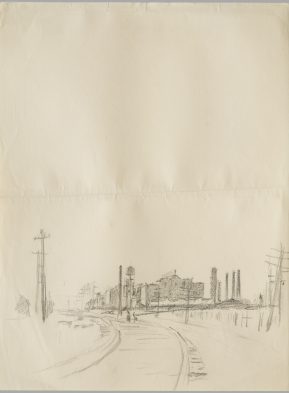 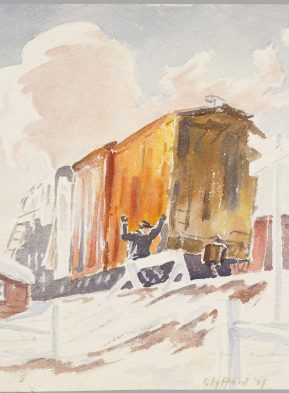 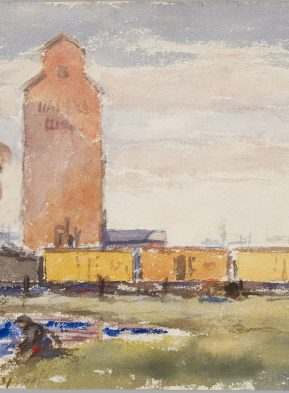 Drawing requires a rigor and skill that expose a maker’s ability in a way that painting, with its more seductive materiality, can readily disguise. Still’s works on paper— in particular, these graphite studies of Alberta farm workers—show that he was a natural draftsman. In his writings, Still insisted on the importance of the “hand” as an extension of the eye and mind. This idea reveals a philosophical dimension in Still’s practice: it implies that his incisive draftsmanship was the physical embodiment of his innermost sensibilities. 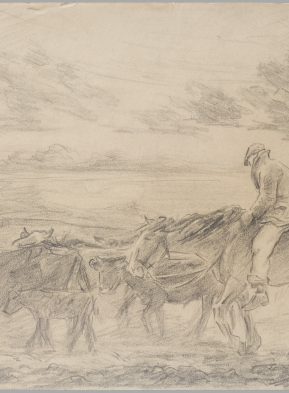 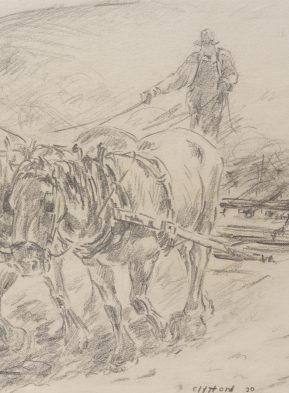 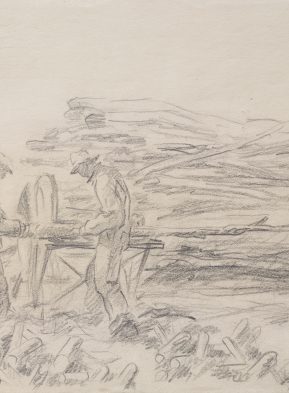 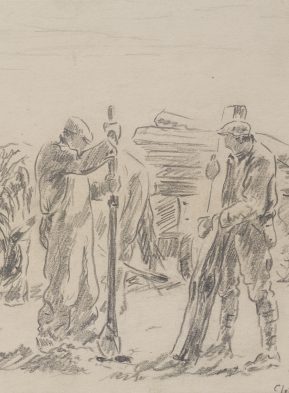 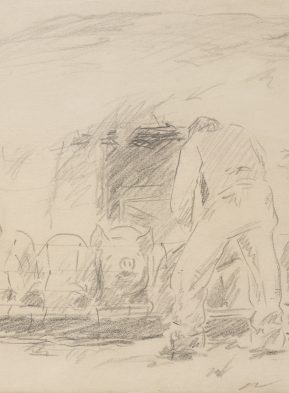 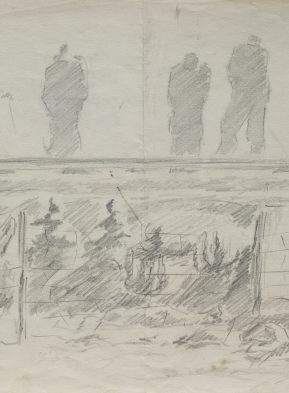 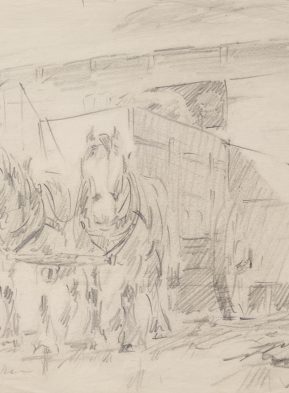 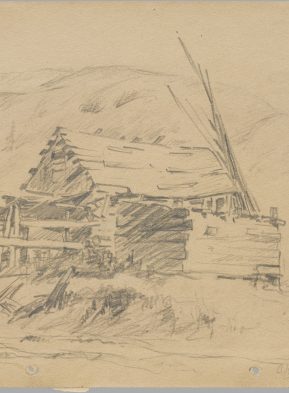 These early pastel and watercolor landscapes depict a central concern with space—conceived alternately as a desolate emptiness or as ethereal fields of color. Significantly, Still later recalled, “[J. M. W.] Turner painted the sea, but to me the prairie was just as grand.” 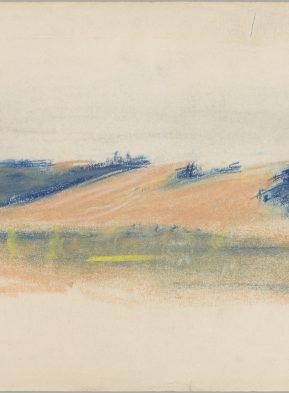 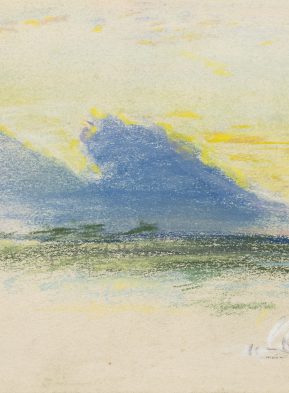 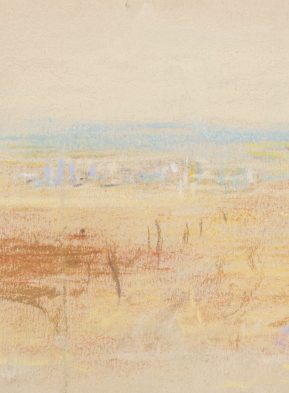 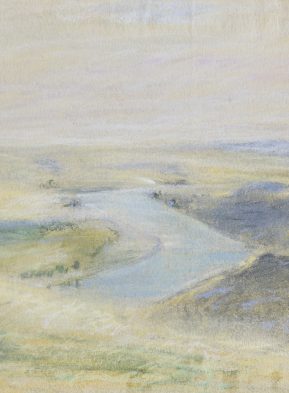 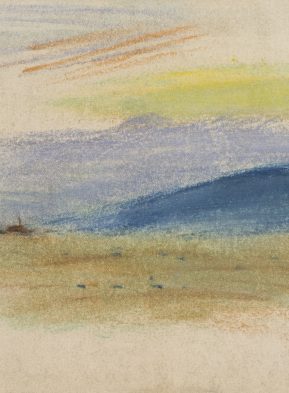 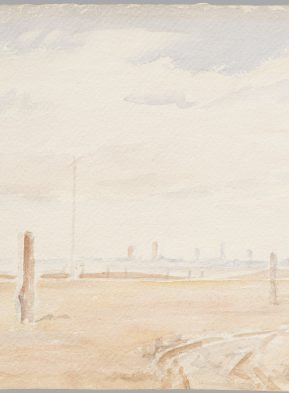 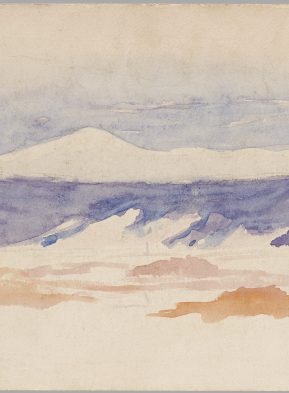 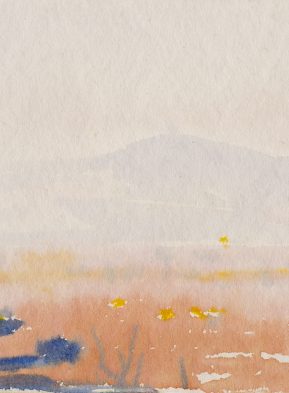 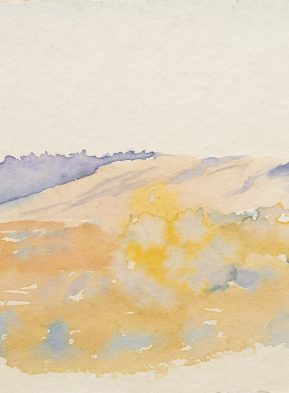 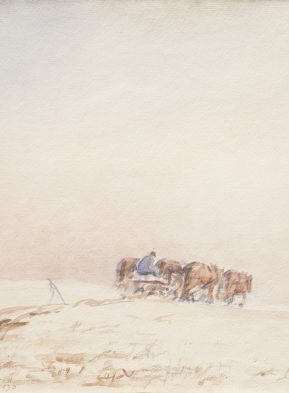 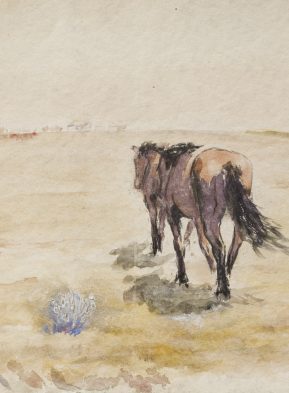 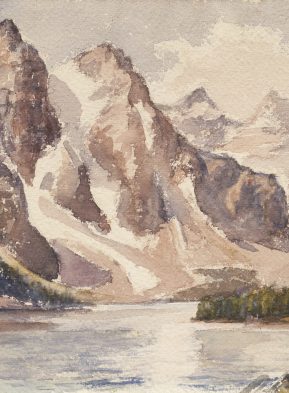 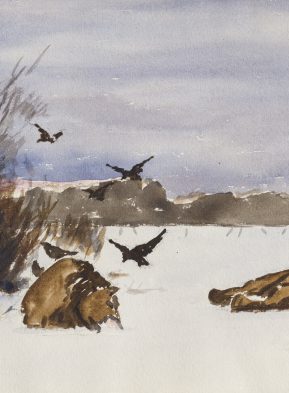 The distinctly sloped line seen here in the askew trajectory of the train’s smoke reappears throughout Still’s career. After its emergence in his early landscape works, it develops in the 1940s as a figural reference [see, for example, PH-547 (1943), oil on paper] and later becomes a key compositional element in his abstractions [PH-696 (1970), oil on poster board].

Still often made certain internal elements and passages within individual works—here, see the two men facing one another—echo each other, suggesting that doubling and repetition were important aspects of his art.

Still often made certain internal elements—like the two horses seen side by side in this watercolor—and passages within individual works echo each other, suggesting that doubling and repetition were important aspects of his art. See for example PD-15 (1930), graphite on paper; PH-493 (1943), oil on paper; PH-510 (1946), tempera on paper; and PP-594 (1971), pastel on paper.

Painted when Still was twenty-six years old, after several graphite and pen and ink studies, this watercolor shows his precocious command of the medium and is executed in a style reminiscent of Winslow Homer. Typically, there is symbolism: the crows and dead animals picture a landscape of wintry death.